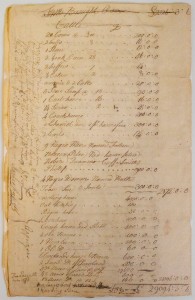 The operation of a northern plantation required seemingly endless hours of labor, both general and specialized.  Enslaved Africans tended gardens, planted and managed crops, preserved food, cared for animals, and fed and clothed all the residents. Yet they somehow found time for family life and spiritual traditions, as well.  The surviving traces of these activities are either handmade or household objects that have been reworked for alternative purposes, reflecting creativity in the face of restricted access to goods.

Although hard to imagine today, dealing in human beings was a proper gentlemanly pursuit in the 18th century, just like growing crops or selling manufactured goods. Slave traders were often the very pillars of society and occupied the most revered public offices, selling human cargo on the side with impunity. Both Isaac Royall, Sr. and Jr. were involved in all three of the principal elements of the Triangular Trade: sugar, rum, and enslaved people. They were also merchants, philanthropists, and one of the largest slave-holding families in New England. New England’s real wealth, however, continued to lie in slave trading (rather than slave-holding) and the indirectly affected industries of shipbuilding, rum distilling, and other finished colonial products.

By the 1760s, New England was producing rum specifically to outfit slave ships en route to Africa, rum being the preferred medium of exchange there, and Medford was one of the centers of that production. By the 1770s, an estimated 75% of New England’s total raw and finished exports were tied directly or indirectly to the trade in enslaved people. Slave trading by itself was not most of the economy, but it was one of the sole sources of surplus income in New England, which was important because the New England colonies were perpetually in debt to Britain.

Acts of Rebellion & Envisioning a New Society: A Conversation with Drs. Vincent Brown and Timothy McCarthy: September 23, 2020 at 12:00 pm: Visit our Events page to learn more and register: Details.