Little is written about the lives of enslaved people at the Royall House. Census and probate records have preserved the names of more than 60 men, women, and children enslaved by the Royalls. For a list of names and tenure of these individuals, see Documenting Those Enslaved by the Royalls. This number is probably representative, but may well be incomplete. More importantly, most of what we know about their daily lives has been unearthed through the archaeological investigations at the site. 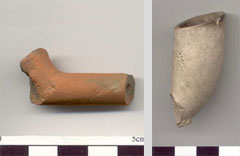 A minimum of 37 clay tobacco pipes was recovered from the site, one possibly hand-built, made of local red clay. Another commercially produced white clay pipe has been altered by the incision of the letter “M” in several places, which may have been an initial meant to mark ownership.

Ten Hills Farm was a 500-acre farm that was principally involved in wool and cider production, the raising of livestock, and the growing of English and Upland hay. These tasks would have been carried out by enslaved Africans, who, in the North, were frequently jacks-of-all trades, as well as skilled in several specialized tasks.

Enslaved people were housed in the Great House, where Isaac Royall, Sr.’s probate inventory lists “negro beds” in the kitchen, the kitchen chamber, and the attic spinning garrets, as well as in the Out Kitchen. Other enslaved residents might have been housed in other outbuildings on the property, in closer proximity to their places of work, perhaps in barn lofts or boathouses. Since the Royalls’ farm has long since been subdivided and developed into what is now the City of Medford, nearly all of these outbuildings are forever lost to us. 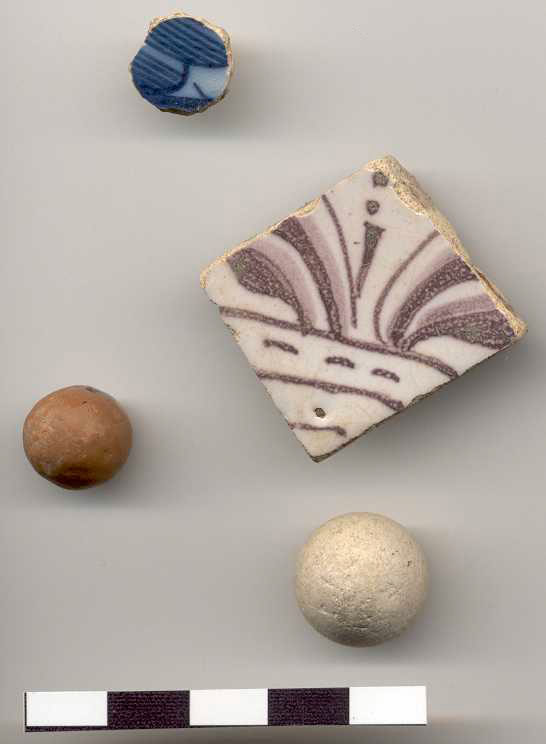 Our work around the Great House and Out Kitchen, however, has shed considerable light on aspects of slave life at the heart of the estate. Archeological evidence of rest and relaxation at the Royall House comes principally in the form of tobacco pipes and gaming pieces. Smoking was an important part of social life in the quarter, enjoyed by both men and women. Several potsherds and tile fragments had been reworked into gaming pieces.

Finding evidence of “games” and leisure in the archaeological record is more than quaint. In recreation, we see an active reassertion of humanity within the worst of dehumanizing conditions. The prevalence of such evidence on slavery sites across the country attests to its importance, as do the often creative ways enslaved people created and possessed these items. 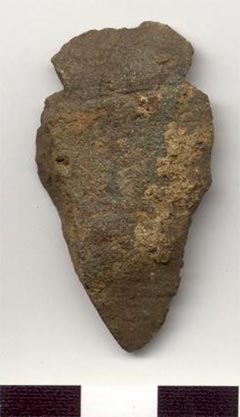 A few artifacts from the Royall House provide scant but provocative evidence of an African-American aesthetic among those the Royalls enslaved in the realms of magic, religion, and medicine. These artifacts undermine the idea that those enslaved in New England were necessarily more assimilated into Anglo-American cultural forms than enslaved peoples elsewhere. They may represent enslaved people’s own endeavors to harness higher powers to protect themselves from, or prevent the worst effects of, family and community instability.

A possible charm (pictured, left) was found in the Slave Quarters’ West Yard. It consists of a stone flake, shaped into an arrowhead with a small groove etched between the side. The object may have belonged to a belief system of Akan derivation in which prehistoric stone projectile points were believed to have magical powers.

Several hundred berry seeds, and over 4,000 faunal specimens were recovered from the Royall House, 86.5% of which were found in the yards surrounding the Slave Quarters.

Archaeology on early African-American sites in the South and Caribbean have almost universally found large quantities of wild animal and fish bone, which has suggested that enslaved people in these regions often hunted and fished for themselves to supplement the provisions supplied by their masters.

Surprisingly, this was not at all the case at the Royall House. The floral and faunal remains suggest that, with the exception of the occasional berry-picking excursion, those held by the Royalls were doing little or nothing to supplement the provisions they got from the resources of Ten Hills Farm, either through the exploitation of wild resources or the cultivation of domesticated ones. As of yet, there are no comparative data to be had to help us interpret this surprising phenomenon.

As more early African-American sites from the colonial North are excavated, it will be of great interest to see if the same pattern plays out across the region, possibly hinting at some fundamental, systemic differences between Northern and Southern or Caribbean slave adaptations.