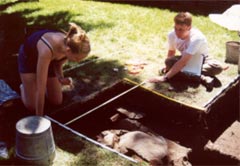 The Royall House estate is a powerful reminder of slavery in New England.  In search of evidence of this often overlooked aspect of the region’s history, archaeologists from Boston University documented building remnants, traces of landscaping activity, and buried objects.  These discoveries shed light on the vastly different experiences of the two groups of people who lived here.  More than 65,000 objects and fragments recovered from the Royall House grounds reflect the pre-Revolutionary era.  To understand the historical meaning of found objects, we must consider not only the artifacts themselves, but also where they were found, relevant documentary evidence, and their cultural context.  Considered in this way, the objects unearthed around the slave quarters and the mansion illuminate the daily lives of the property’s past residents. 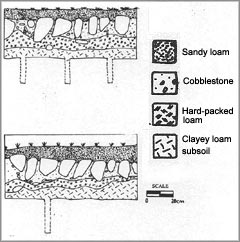 Excavations revealed an expertly laid cobbled surface that would have greeted the Royalls’ illustrious guests in their carriages and would have been part of the Royalls’ social display.  In a similar vein, our discoveries have provided good evidence of some of the refurbishment, construction, and beautification that was undertaken by the Royalls to transform a modest dwelling into a lordly residence worthy of their social standing in the community.

In fact, artifacts recovered from these areas that seem to reflect not just work life but also family life, leisure time activities, and craftsmanship of enslaved people, support the idea that these areas were indeed understood by white and black alike to be a “black domain.” To them, they might have connoted family ties and time away from Master: long smokes on the stoop out back, an impromptu game of checkers or marbles, quiet time to sew, make beads, or tell stories about Africa and freedom to the children who had never known it.

Archaeology has repeatedly uncovered these contestations between slave holder and enslaved at the Royall House, as they struggled to define themselves and each other in the violent and shifting world of pre-Revolutionary America.

Archaeological investigations have revealed information on the daily lives of the enslaved Africans who lived here. To learn more, visit the Enslaved Peoples’ Lives at the Royall House webpage.